Okay, Rick Santorum is out.  What does it mean for the race to the GOP nomination?  And what choices does the Ron Paul campaign now face?
.
You can help us decide.  Here are some options.  And you don’t have to chose just one.
.
1.) Make an all out effort to go for it.
2.) Become the anti-Romney candidate and gather his opponents.
3.) Work with Gingrich to block Romney.
4.) Stay in the race but don’t antagonize the GOP leadership.
5.) Seek a deal with Romney while it still matters.
6.) Prepare for a Third Party run.
.
Here are some factors to keep in mind.
.
The widely reported Associated Press delegate tabulation is way off and this is driving all of the television commentary.  For example, the vaunted New York Times has made no effort at a delegate count of their own, they rely fully on the AP.
.
Keep in mind, the AP reported 40 people at a Ron Paul event in Hudsonville, Michigan when photographs showed two thousand.  They reported 1,000 people at an event in Missouri while their own AP photograph of the event, which captured only part of the audience, numbered 2,500.  And they make no effort to correct any of this.
.
As of today, the Associated Press awards Romney with 12 delegates in Iowa, 12 in Maine, 14 in Nevada, 9 in Colorado and 30 in Washington.  Don’t they wish. They also awarded him only 7 in North Dakota where he came in third place behind Rick Santorum and Ron Paul but captured even more at the ND State Convention than they had reported.  In fact, even today, the AP chart reads exactly the same, even though the numbers are dramatically different.  Journalism is dead.
.
By the way, I have this reoccurring nightmare that some of the state conventions will retroactively award Romney their delegates and the media will end up being right, like a broken clock is right twice a day.  Then they will say, “See, what was all the fuss about?  We were right all along.  We were better than right.  We were prescient.”
.
Nevertheless, campaigns are not in the national media entertainment business.  And we don’t have executives from holding companies telling our executives what to do and passing the instructions down to our on air anchors and pundits.  Holding companies that depend on billions of dollars of interest free loans from that elitist piggy bank, the Federal Reserve.  And unlike the media, we don’t have major companies who advertise with us and who coincidentally benefit from the same corruption by getting low interest loans from the banks who are getting interest free loans for the FED.
.
In fact, we are in the business of taking on that very cycle of corruption.
.
So, we still have to deal with facts.
.
Without revealing too much, and keeping in mind that this changes weekly, you would be wise to calculate that Mitt Romney has about 106 delegates less than what the national media is now showing.  Santorum, even before dropping out, had about 16 less.  This includes adding delegates that the media incorrectly withheld from Santorum and then subtracting its false calculations.   Now add 98 delegates to Ron Paul.  And you have the real picture of where it stands today.
.
There is something else.  Many of the delegates who have already been selected to go to Tampa and are pledged to vote for Mitt Romney, Rick Santorum and Newt Gingrich are actually Ron Paul activists who were chosen as delegates because they showed up and got elected as such, not because they committed to any of the candidates. We don’t yet have a complete count on any of this but it is substantial.  We are in the process of taking over the GOP at many precinct and country levels.  And that is translating into power at the state conventions where the delegations are chosen.  The GOP establishment is trying to block this by telling their people not to vote for anyone under thirty years of age or anyone who is Hispanic.  But our people are filling those delegate slots.  Even we can’t keep up with the numbers.
.
This means that the convention floor in Tampa will be loaded with Ron Paul supporters. And it means if Santorum releases his delegates many of them will vote for us because they were never Rick Santorum supporters in the first place.
.
Don’t underestimate the power of money to influence this process.  And don’t underestimate the power of money to corrupt this process.
.
The presidential campaign of former Speaker of the House, Newt Gingrich, is $ 4 million in debt.  So far Romney has declined to make a deal. This stalemate is likely to go all the way to convention.  Why should either side back down?
.
And keep in mind this number. 15%.  Many of the remaining primary states require a candidate to get 15% of the vote before being awarded any of the delegates.  With Santorum out, it is likely that both Gingrich and Paul will qualify for delegates in most, if not all of these remaining states.  Why is that important?  Won’t it take more than 15% to win the nomination?  It is important because it means that Gingrich, without any money, will still be able to drain off a few anti-Romney, anti-Paul delegates that would have stayed home but will now help keep a Romney victory at bay.
.
Texas is important.  We will get no breaks from the mainstream media.  So Texas will require television advertising of our own.  And that will require money.  Watch the next moneybomb closely.
.
Oh, by the way.  For those following the drama in St. Charles, Missouri.  We won last night.  We won ALL the delegates.  And the man they had arrested last month was elected the chairman.  They meant it for evil.  God meant it for good.
.
Okay, let’s see your vote.  I am for making an all out effort to win it all.
.
You can join the discussion at   http://www.facebook.com/DougWeadOfficial
. 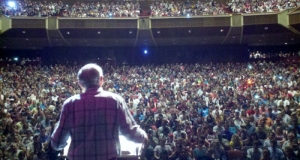 Doug Wead is a New York Times bestselling author whose latest book, Game of Thorns, is about the Trump-Clinton 2016 election. He served as an adviser to two American presidents and was a special assistant to the president in the George H.W. Bush White House. View more posts

763 thoughts on “What Now? Ron Paul’s path to victory”